Wine production to fall by 18% on 2016 after spring frosts ravage vines, but hot summer could deliver top vintages 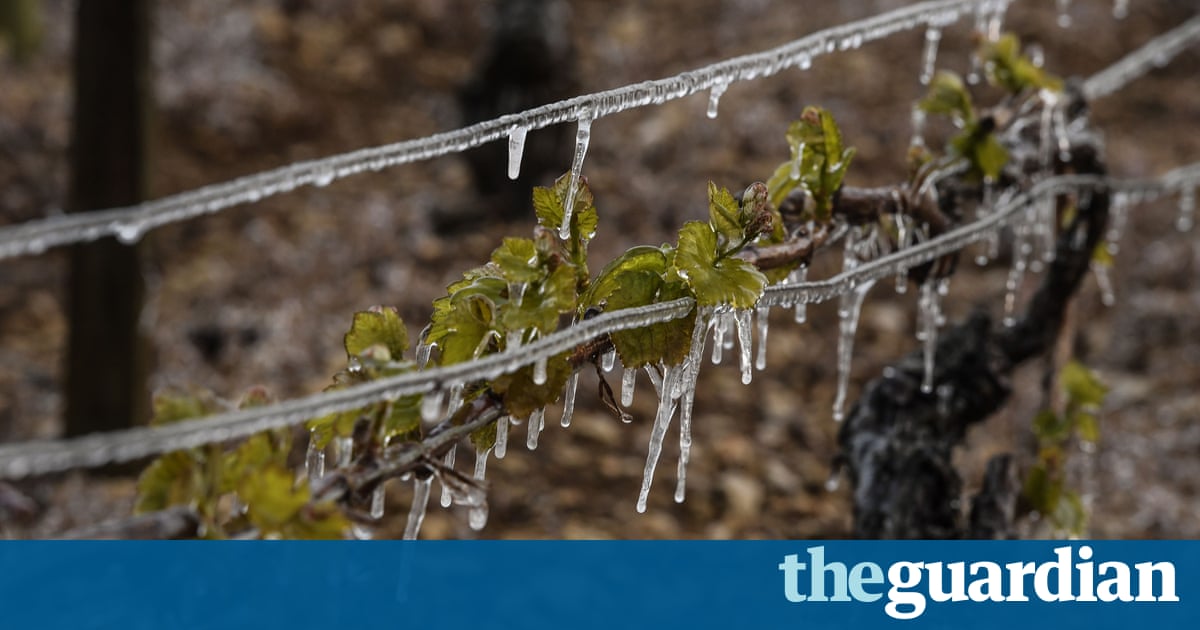 France is expecting its poorest wine grape harvest since 1945 after an unusually mild March and a frosty April, experts have said, although the hot summer promises to deliver excellent quality.

At harvests everywhere, in places where we thought there would be a little less, theres a lot less, Jrme Despey, head of a governmental wine advisory board, said on Friday. This years harvest will be the smallest since 1945, he told a news conference.

The French agriculture ministry said output was expected to total 37.2m hectolitres 18% less than 2016 and 17% below the average over the past five years. The 2016 harvest was one of the poorest in 30 years.

Despey said the ministry figures were based on assessments made in early August, before the start of the harvests, which have now begun in the south-east about two weeks earlier than usual.

Despey, who is also secretary general of Frances biggest farmers union, the FNSEA, said last week he expected a 40% drop in output in the prime wine-growing region of Bordeaux, the countrys largest. Vineyards in north-eastern Alsace, which produces mainly white wines, were also hit hard.

This years drop in production is mainly attributable to the severe spring frost that affected all the wine-growing regions to varying degrees at a sensitive time for the vine, the agriculture ministry said.

The bitter cold struck twice within a week in April, ravaging the fragile shoots and buds that had emerged prematurely after mild temperatures in March. To combat the frost, winemakers in Bordeaux set fires in oil drums, then positioned them carefully between the rows of grapevines. Giant fans were also deployed to battle the cold, damp air settling on the plants.

Some losses are also anticipated in the Burgundy region, where vines have been repeatedly hit by hail in recent years.

Vineyards in the south, Beaujolais and the Rhne valley suffered during an exceptionally dry summer that will further depress yields, the agriculture ministry said. But one advantage of drought is that it reduces the impact of diseases on the vines.

The maturity and good health of the grapes pointed to a year that will stand out for quality, happily, Despey said.

In the five years to 2016, hail knocked out half of Burgundys harvest, according to the Global Wine Risk Index. The index covers 110,000 wineries in 131 countries producing about 26bn litres every year.

Switzerland, Austria, Germany and Hungary also experienced frost this year that could diminish harvests by 30% and even up to 60% in some areas.

Wine, one of Frances biggest exports, is a highly vulnerable industry, said researcher James Daniell, of the Karlsruhe Institute of Technology in Germany. About 10% of wine production was lost to natural hazards every year at an estimated cost of $10bn, he said.

At the Vinexpo wine fair in Bordeaux in June, winemakers brainstormed over how to mitigate challenges to their livelihood posed by climate change. Producers have found that global warming can cause grapes to ripen earlier, which changes their sugar and acid levels, leading to lower-quality wines with higher alcohol content.

Some are using low-tech approaches to delay harvesting times and increase soil moisture, and are experimenting with pruning later or using grape varieties that take longer to ripen, thrive in warmer climes or are resistant to drought. But these grapes are not yet ready to be turned into great wines, experts say.

← ‘Amazing’ ancient Roman village unearthed in France
48 hours in Nice: an authentic taste of the South of France →

Frenchrivierago is a lifestyle blog that covers what you need to know about The French Riviera. We cover everything under the Mediterranean sun such as Travel, Children, Beauty, City Guides, Bars, Restaurants, Wellness, Places to Stay etc. Our writers are what makes this blog so unique. They come from different walks of life and countries such as France, The USA, Trinidad, The UK, Spain, Italy, Sweden, Denmark, Canada, and India.

We make up the melting pot on the French Riviera, and our aim is to share what we love with you.

Get $10 Worth of FREE Bitcoin!